Build your own Winter Games Experience with On Point Events

From the excitement and awe of the opening ceremony to the thrills of all the sporting action, the Winter Games in Beijing, China will be the most anticipated sporting event of 2022! Immerse yourself in the friendly Chinese culture, while witnessing the top athletes from around the world compete for Olympic glory in 7 sports, 15 disciplines, and 109 events. With just one call to our Experience Specialists, you can get your front row seats to sports history. Benefit from our years of research and expertise to ensure you get the most memorable sports travel experience to Beijing 2022.

Build your own Winter Games Experience

If you’re looking to enhance your Winter Games experience, we have options available to make your experience even more memorable.

Preferred Seating for the 2022 Winter Games

Four Seasons Beijing: The luxurious Four Seasons Beijing will be one of the most ideal places to stay in for the 2022 Winter Games. As one of the top hotels in the city, Four Seasons Beijing is determined to give guests an exceptional experience. Guest rooms are elegant and spacious with contemporary decor, marble bathrooms, reading/seating areas, and modern technology. Hotel amenities include a 24-hour fitness center and a stunning pool, complete with breathtaking city views. Between Winter Games events and exploring Beijing, guests can relax and find a sublime retreat in the hotel’s world-class spa.

Hilton Beijing: Contemporary decor brings life to the capital’s Chaoyang business and diplomatic district. Find convenience in this 506-room property while indulging in its opulence. You’ll find delicious authentic southeast Asian food at MAKAN kitchen. Or spend time at Jing Spa and experience a combination of holistic and traditional Chinese therapies inspired by practices from Bali, Europe, Thailand, and China.

DoubleTree Xicheng District: In the middle of the bustling city lies this peaceful oasis ready to welcome you with warm cookies, friendly service, and comfortable accommodations. You’ll have easy access to major attractions such as the Forbidden City, Capital Museum, and National Center for the Performing Arts. Be sure to check out the unique rooftop garden with stunning views of the city.

Four Points by Sheraton Beijing: The versatility of the Four Points by Sheraton in Beijing guarantees satisfaction for everyone with its wide range of various amenities and offerings. It is conveniently located near famous sites and destinations like the Olympic Stadium, Tiananmen Square, and the Summer Palace. For shopping enthusiasts, Huayu Fashion mall is ready to be explored.

Preferred Seating for the 2022 Winter Games

Seating for the 2022 Winter Games

The seating at the various venues at the Winter Games are pre-determined by the event organizers and generally set up according to price categories. Some venues will have up to 3, 4, or more price categories. Although all categories will provide a great Games experience, these designations can be very broad. Please use the breakdown and descriptions below to determine the desired category of seating: 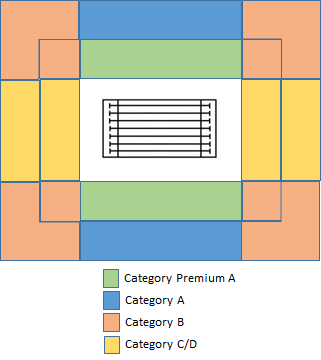 Need a customized Winter Games experience? Speak with an On Point Experience Specialist to help you make it unforgettable

about the 2022 Winter Games and beijing

The Winter Games is a major international multi-sport event that happens once every four years for sports played on ice and snow.

The first Winter Games was held in 1924 in Chamonix, France, with the original five Winter Games sports: bobsleigh, curling, ice hockey, Nordic skiing, and skating. From 1924 to 1936, the Games were held once every four years, suspended in 1940 and 1944 by World War II, and resumed in 1948.

The 2022 Winter Games is scheduled to take place from February 4-20, 2022 in Beijing, China, and towns in the neighboring Hebei province.

With its previous hosting of the 2008 Summer Games, Beijing is set to make history in 2022 as the first city to host both the Summer and Winter Games.

Beijing is China’s capital and the world’s third most populous city proper. One of the oldest cities in the world, Beijing has a rich tradition going back three millennia. The city was strategically established and developed to be the residence of the emperor, making it the perfect location for the imperial capital.

The city is well-known for its luxurious palaces, temples, parks, gardens, tombs, walls, and gates so a tourist who is in search of history won’t be disappointed. Beijing has seven UNESCO World Heritage Sites—the Forbidden City, Summer Palace, Zhoukoudian, Temple of Heaven, Ming Tombs, parts of the Great Wall and the Grand Canal.

After an incredible job hosting the 2008 Summer Games, sports fans can expect that the 2022 Winter Games will be phenomenal.

Speak with an experience Specialist